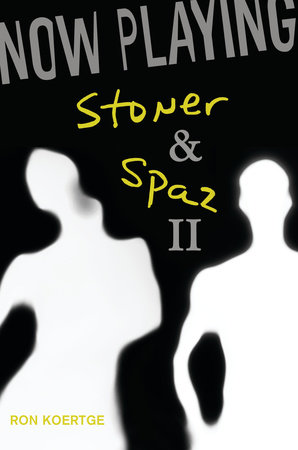 What this book is about:

Stoner and Spaz II is the story of Ben (the Spaz) and Colleen (the Stoner) after, what I presume, are events that happened in Stoner and Spaz, which I haven’t read. Ben has Cerebral Palsy and an eye for the cinematic due to the obscene number of hours he’s spent watching movies precisely because of his CP. Colleen is a whirlwind of a girl who struggles with her own issues, which she uses drugs to escape, but is also madly in love with Ben. Or is she? Isn’t she? Is he? Isn’t he?

The realistic nature of EVERYBODY in this book. It was actually uncanny how real everyone was in the story. Koertge clearly took his time developing all these characters because they all feel real. The story feels believable and modern (well, somewhat, AJ DID have to explain how to USE youtube, so its 2011ness is a bit apparent), but otherwise, it was a well-charactered story.

Colleen was by far my favorite character.

At first, I didn’t like Ben, the narrator. The main character. I actually started reading it, decided I didn’t like him, put the book back in the pile from the library, and moved on. However, several days later, I went back to it and then it drew me in. I guess I just needed to get used to Ben. He wasn’t ever my favorite character, though.

As a quick, easy read that ALSO gives a light prompting about how we view and use others, I really liked it. Whatever underlying messages were in there (and there were several) were done well. It didn’t get preachy, but in a subtle way, got its life lessons across.

I also think the teenagery stuff was handled well. Teens aren’t really my strong age group and so sometimes I find myself frustrated by their almost-adultness-yet-fierce-belief-in-knowing-all-things. This was circumvented by the cool lady across the street from Ben, Marcie. Because she’s not related to anyone, everyone opens up to her and she listens and doesn’t judge them. I could stand to be more like Marcie.

The story kept me going the entire time and I liked the ending, even though the major conflict in the middle of the story had me kind of rooting for both sides for a while, I do feel the way it ended was the most gratifying way for it to end. It was the right move.

With all that, I’d give this book a solid three stars. Having to put it down before picking it back up knocks it down from 4.

Learn more about the book and the author.